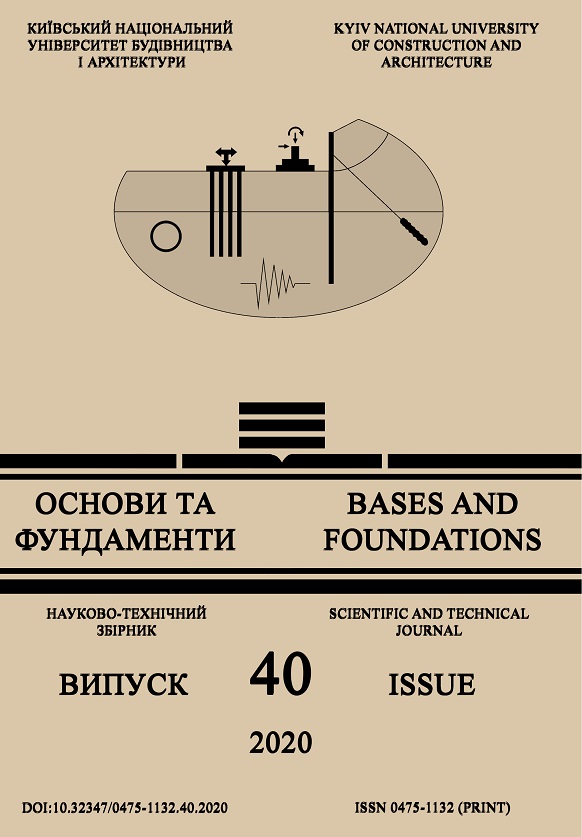 At present, the tendency to build multi-storey residential buildings has become widespread in Ukraine. This is due to a number of reasons: significant increase in land prices in cities, dense urban development and the availability of appropriate equipment for the construction of such structures. One of the most common materials for multi-storey buildings is monolithic reinforced concrete. The main advantage of monolithic structures is the possibility of free spatial planning and the possibility of uniform redistribution of forces in the elements of the frame - the house works as one rigid entire structure. On the other hand, such structures require a long construction time and appropriate highly qualified control of monolithic works. Therefore, as an alternative, prefabricated reinforced concrete structures are used to accelerate the pace of construction.

The numerical modeling of the interaction of the system elements is used as a research method: soil base - foundation - aboveground structure.

It was found that the replacement in a prefabricated house only one basement floor of precast concrete on a monolithic one affects the redistribution of forces, so the self-supporting wall is loaded 2.6 times, and the busiest wall, which rests on both sides of the floor slab, is unloaded to 2.1 times.

It was found that in the case of a basement made of precast reinforced concrete with a precast basement the difference efforts in pile heads (under the load-bearing walls) can differ 1.98 times, and in the case of a monolithic one 1.17 times. So it is mean, the monolithic foundation redistributed of efforts between the piles is more uniform.

It is established that the monolithic reinforced concrete basement, in comparison with the prefabricated one, reduces the uneven settlement of the foundation by 2.4 times.

When designing large-panel houses, it is advisable to provide a basement floor monolithic - this will allow to load the fundamental constructions more evenly, which in its reduction reduces the relative deformation of buildings and reduces their cost.

This work is licensed under a Creative Commons Attribution 4.0 International License.

Authors are published in this journal, agree to the following conditions:

Authors reserve the right to authorship of their work and transfer the journal the right of the first publication of this work under the terms of the Creative Commons Attribution License, which allows other persons to freely distribute published work with mandatory reference to authors original work and the first publication of work in this journal.

The journal's policy allows and encourages the authors to place the manuscript of the work on the Internet (for example, in the institutions' storehouses or on personal websites), both for presenting this manuscript to the editorial office and during its editorial processing, as this contributes to the creation of productive scientific discussion and positively affects the efficiency and dynamics of citing the published work (see The Effect of Open Access).

Assistant of the Department of Geotechnics

Most read articles by the same author(s)